“Why should I choose logrolling? How can I sign up for lessons? How can I compete? What are the basic tournament rules? Where did logrolling come from? When is logrolling season?” These are few of the many questions often asked about logrolling. Read below for the answers to these questions and many more!

Why should I choose Logrolling?

Local events draw dozens of new members to Coulee Region Logrolling each year. After Try Logrolling events, kids often run towards their parents, begging them to send them back. Whether you’re looking to become a world champion logroller, spend time with friends, or get a great workout in, we have the program for you! Logrolling is great for all ages.

This sounds great! What does this sport require?

To a spectator’s eye, one skill comes to mind when watching a log roller; balance. Although a good sense of balance is helpful for every roller, there is much more to the sport. Once an athlete has learned to maintain balance for about ten seconds on a log, their core and leg strength, quickness, and mental game come into play.

Logrolling is a great cross-training sport. Gymnasts, track and distance runners, soccer players, surfers, and Olympians have used logrolling as a tool to improve their strength and quickness.

There is one big rule in logrolling- HAVE FUN! Logrolling is a great way to spend time with friends and family, and it’s always fun to challenge yourself to stay on a little bit longer each class.

Okay. So, I’m all ready to sign up for classes. Where do I begin?

La Crosse Area is home to multiple programs! You can sign up for summer sessions at the following places-

The Programs page above has registration forms, class dates and times, class descriptions, and additional information on all local programs.

Tournaments are a great experience for kids, promoting self-confidence, responsibility, and a competitive spirit! They’re also a great way for kids and adults to get to know other logrollers and get lots of extra rolling in. Best-of-five or best-of-three matches are held to determine what place each roller gets. Tournaments might seem like a big step right away, but all “amateur” tournaments listed in the tournament page above are perfect for kids and novice adults who have been rolling for any amount of time! Coulee Region Logrollers and Coaches are very friendly and always love showing the ropes to new competitors. At each amateur tournament, the top three finishers will be awarded a medal or another cool award.

Tournaments are super fun and are highly recommended for all rollers! Don’t forget that anyone can compete- no matter if you have been rolling for two years or two weeks!

When is Logrolling season?

Amateur logrolling competitions (for kids and novice adults) are held year-round! Most of the big championship tournaments open to Coulee Region rollers are held during the summer.

The USLRA sanctioned professional logrolling season begins in June and ends in August.

I’ve heard that many pro logrollers also compete in boomrunning- what’s that?

Boomrunning is logrolling’s exciting sister sport!  Logs are chained together across a body of water (such as a pond, river, or lake). On “GO” or when the competitors hear a beep or whistle, the runners sprint as fast as they can across the logs to the other side, around an obstacle, and back across the boom. If one falls off the boom, they have two chances to get back on and run back to the end. If they cannot get back on, they are disqualified from that run. Of course, the winner is the fastest runner. Each athlete’s score is based on their time.

At the moment, there are no boomrunning classes offered through Coulee Region Logrolling. If you are interested in participating in boomrunning, contact us by emailing lacrosselogrolling@gmail.com or messaging us through social media and we will provide the information you are looking for.

What type of equipment is used in logrolling?

There are multiple different sizes and types of logs used in tournaments. Some amateur tournaments use wooden logs with carpet glued on each side, while others use synthetic Key Logs.

COMPETITION SYNTHETIC LOGS: In recent years, more and more amateur logrolling competitions have introduced Key Logrolling logs! Beginner-level competitors at these tournaments have the option to use training fins to prevent the logs from spinning too fast. Sizes of Key Logs include;
#1 log- 15 inches in diamater
#3 log- 13 inches in diameter

EVEN MORE LOGS!
#6 log- 10 inches in diameter (The world’s very first #6 log is right here in the Coulee Region! It is currently at Erickson Pool, come check it out this summer!)

ALL logs have a line painted in the middle to constitute sides.

If you are signing up for a tournament and still have questions about what type of logrolling logs are going to be used, please do not be afraid to ask your coach or an experienced logroller for more information. Chances are, they had the same questions when they first started logrolling and would be happy to help! 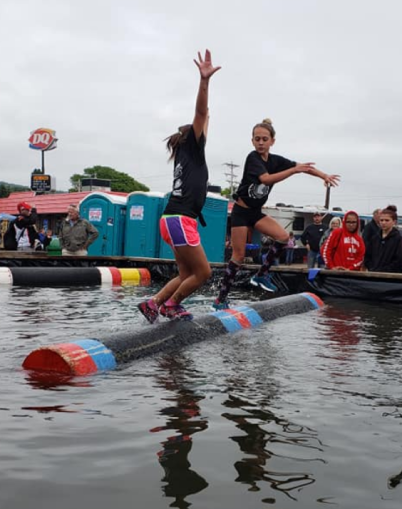 Where did logrolling come from?

Lumberjacks, the men who cut down trees and sawed wood into the material that holds up many modern-day buildings, started the whole rage! Wood produced in the lumber business were transported to different sawmills in different locations to be ready to be shipped around the country. The best way to ship the huge loads of logs was to send them down the river to their designated sawmill destination. However, this was an extremely difficult and dangerous job for the Log Drivers. Too many logs in the water at a time could cause the logs to get all clumped together, or create a log jam. When this event would often occur, lumberjacks began to wear spiked boots and brought poles with them and rolled on top of the logs. The spikes were to help them stay right on top of the spinning logs and the poles were to help them break apart the logs. This became a daily and rather dangerous job for the quickest and most athletic lumberjacks.

Late at night after a long day’s work, lumberjacks began to compete against one another on the logs! After awhile, they started to take logrolling more seriously and real logrolling competitions started popping up all over the United States and Canada. The first sanctioned WORLD CHAMPIONSHIPS were held in 1898 in Omaha, Nebraska. In 1929, women were allowed to compete at a professional level.

Today, logrolling is still growing! The sport has now made it all over the globe and has great potential to be a future Olympic Sport.

What are common terms used in logrolling that I should know?

AMATEUR- anyone competing at the non-professional level.

DOUBLE ELIMINATION TOURNAMENT- where logrollers compete through a bracket system.

FINALS MATCH- the match in a double elimination tournament where two competitors have a match to decide who wins 1st and 2nd place.

HOLDING THE LOG- when a judge (or your coach/instructor during practice/class) holds the log from the side of the pool.

BACK BRACKET- the bracket you are placed in once you lose a match in a double elimination tournament (not including the finals match) the highest one can place after entering the Back Bracket is 3rd place.

POLE START- when two competitor hold on to poles held by judges before the match starts as the log floats out into the water.

RANKINGS- Amateur and Pro Rollers are ranked by their placings in the current year.

ROUND ROBIN TOURNAMENT- everyone rolls against everyone in their division.

SPIKES- shoes with spikes on the bottom that the pros wear while rolling on logs without carpet.

SUPER SERIES- Every amateur logroller that competes in a tournament wins points towards Super Series! Each competitor will earn one point for competing as well as a certain amount of points from what place you took in the tournament. At the last tournament of the fall season, points are added up and the top three athletes win an award.

TOURNAMENT- Logrollers compete against each other for a prize (pros win a medal or a trophy as well as prize money, as amateurs only win a trophy or medal) and to improve their current ranking placement.

TOURNAMENT LEVEL- pro tournaments have levels depending on the prize money and competition.

TRAINER- a half sized log that only one person can fit on. This is for practice only.

USLRA- United States Log Rolling Association is the official association that organizes tournaments, sport promotion, programs, rules, rankings, amateur super series, and more! ALL competitors MUST be a member of the USLRA.

WINNER’S BRACKET- everybody starts in the Winner’s Bracket at the beginning of the tournament. When they lose a match, they head to the Back Bracket.

WORLD CHAMPIONSHIPS- the biggest and highest ranked tournament held for three days annually in Hayward, Wisconsin. The World Championships is open to ALL amateur rollers, while the top 24 internationally-ranked men and women are invited to compete on the pro stage.