With the beginning of September comes the “logrolling blues,” for a lot of logrollers as competitions wind down and the excitement of summer logrolling ends. Thanks to the phenomenal program at the La Crosse Area Family YMCA and events held at indoor venues around Wisconsin, logrollers in the Coulee Region have been as busy as ever this fall! Keep reading for amateur tournament results, class reviews, upcoming dates, and more.

Amateur rollers aged seven to seventeen (and beyond!) demonstrated skill, speed, and superb sportsmanship at three USLRA tournaments in Wisconsin, including La Crosse’s own River Rat Roll tournament for kids and novice adults. Join us in congratulating the following athletes;

Eli Neve. On Saturday mornings throughout the fall, Eli worked hard on perfecting his footwork with his much older practice partners. He finished in second place at the River Rat Roll and had a great time spending time with both old and new friends this season.

Chandler Gilberts. Chandler competed at his second tournament ever at the River Rat Roll and earned fourth place among a really great group of rollers. We can’t wait roll with Chandler even more!

Grace Berg. Grace rolled at the La Crosse Area Family YMCA on Tuesdays and Thursdays this fall and showed off some great rolling at both the Oconomowoc Rock ‘N’ Roll and River Rat Roll tournaments. She can officially call herself a veteran of the ultra-talented U10 age bracket as she steps up to U13 next year! Grace took fourth place in U.S. Logrolling’s Super Series.

Aini Anderson. With determination and energy, Aini represented Coulee Region Logrolling in Oconomowoc, La Crosse, and Hudson. She enjoyed rolling with different rollers in her age category and is excited to keep on rolling into the 2018 season. Aini took first place in U.S. Logrolling’s Super Series.

Hailie Gilberts. Hailie did a great job competing at the River Rat Roll with all of the girls in her division and had an awesome time at the tournament. Keep up the great work Hailie!

Alex Ciganek and Logan Pagliaro. As two intermediate level rollers, Alex and Logan competed for the first time at the River Rat Roll and finished first and second in their division with big smiled on their faces! Alex and Logan are shining examples that the fun and competition involved with logrolling make a great combination for kids of all ages.

Ella Wedul. Ella competed for the first time at the River Rat Roll and finished in second place! Ella has rolled for many summers and has now started taking classes at the La Crosse Area YMCA and enjoys challenging herself on faster-moving logs.

Luke Wedul. Luke rolled on Saturdays this fall along with his sister, Ella. Luke had a great time competing at the River Rat Roll!

Kody Koblitz. Kody, 17, finished first place in Oconomowoc, La Crosse, and Hudson this fall and took the top spot in U.S. Logrolling’s Super Series. As he wraps up a successful amateur career, Kody looks to compete in amateur tournaments during the 2018 Spring season and declare his professional status this summer.

Tre Owen. Tre competed in U17 for the first time this year and took third place at the River Rat Roll in a significantly talented group of athletes.

Dan and Bill Hinman. Dan, a freshman at UW-La Crosse, competed at the River Rat Roll’s adult novice division this year alongside his father, Bill. 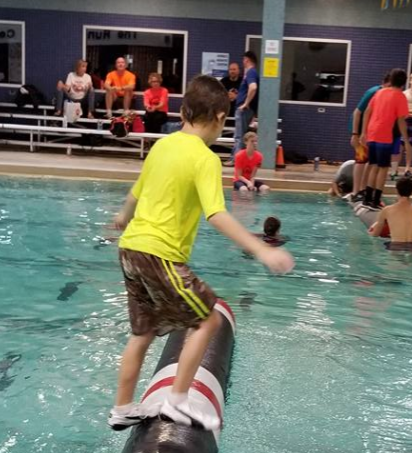 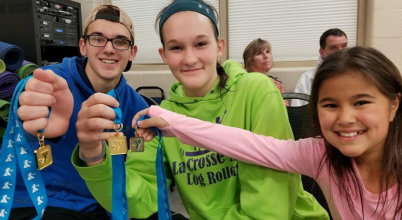 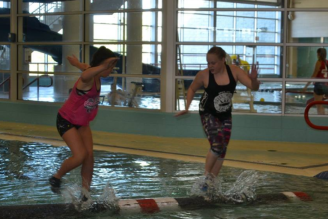 Logrolling season just never seems to end in the Coulee Region! The fabulous La Crosse Area Family YMCA hosted multiple classes and training sessions for rollers of all skill levels and goals on Tuesdays, Thursdays, Fridays, and Saturdays this fall. New rollers love to learn logrolling at the beginning of the new school year and we love to watch them progress! A big thank you to the YMCA, coaches, and rollers for keeping the logrolling love alive during the fall.

On Halloween night this year, Tuesday night logrolling-goers were in for a spook-tacular practice. Rollers dressed up for Halloween and enjoyed seemingly bottomless bags of sweets after the fun in the water!

Among rollers from both Minnesota and Wisconsin, the River Rat Roll amateur tournament in La Crosse was a hit! The talent and potential shown by rollers from all over the place was truly impressive and the smiles, laughter, and outstanding sportsmanship demonstrated at the event are what the sport’s really all about. This event could not have been possible without the La Crosse Area Family YMCA, judges, and bracket keepers who traveled to La Crosse, and the awesome local families who put in a great amount of time and energy in organizing the tournament! The next logrolling tournament at the La Crosse Area Family YMCA, the Rusty Ankle, will be held in early May of 2018.

Don’t be too down about winter- there are dozens of great logrolling events for all kids and novice adults in the La Crosse area and around the Midwest coming up this winter and throughout 2018! Keep reading for details: 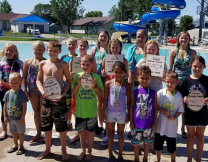